Description of The Patrician

One of the best historical business games ever made, The Patrician enjoyed tremendous success on the Amiga but unfortunately very little attention from PC gamers (the same fate suffered by most other Amiga hits).

The game is similar to Holistic Design/QQP's Merchant Prince, but with more emphasis on political power and influence. Although not as good as Merchant Prince, The Patrician is a competent game that deserves much more attention than it received, and is an arguably better game for multiplayer competition (the game allows up to 4 human players).

As a trader living in medieval Europe, your goal is to become the Alderman (i.e. leader) of the Hanseatic League which controls most of the trading. To become Alderman, you have to make a lot of money to buy political power. This is done by the usual buy-low-sell-high routine: you sail to one port, buy some goods, then sail to another port and sell the goods at a higher price.

In all, there are about 40 commodities to barter with, and 16 cities to sail to. The prices are calculated in a very realistic way, taking into account factors like the time of the year, and the amount of goods in the city. After you make a handsome amount of money, you must try to get elected mayor in your home city. This requires that you 'buy' favor from townspeople, by donating money to the poor, funding a new church, throwing parties, etc.

If you become a mayor, then you will be admitted into the Hanseatic League meeting that is held every four years, and you can finally get elected Alderman if the other members, i.e. mayors of other cities, are impressed with you. This means that you have to be well liked in as many cities as possible to get elected. This is not easy, since city councils will not be happy of your arbitrage operations (i.e. selling expensive goods in their city while buying cheap-- thus making the city lose money).

You must also remember to keep an eye on your own city, as local politicians won't give up even after you have been elected mayor. If your electorate throws you off the mayor's post, it won't matter how well liked you are in the rest of Europe.

What makes The Patrician stand out as one of the best historical sims ever made is the attention to detail and the huge variety of gameplay options. For instance, getting married is an important part of the game, as you can get a great dowry if you choose the right wife (or husband, if you play as a woman). Also, you may need to defend your city from hostile attacks, and send out huge fleets to chase pirates.

On the other hand, you may also choose to enlist the pirates' help, by giving them a well-armed ship to raise hell in your opponents' waters. But if you choose to hire the pirates, or do anything else that is illegal such as bribing city officials, you run the risk that someone will find out about it and decide to blackmail you.

By all accounts, The Patrician is an outstanding game. The game offers an epic scope and seemingly endless array of options and choices. In addition to the features I mentioned, there are optional action sequences, plagues, spice fleets, and calamities like fires that add to the excitement.

If you love The Merchant Prince, you will definitely like The Patrician as well. The good news is that the sequel, The Patrician II has been released by Ascaron in June, 2001, and is enjoying a lot of great reviews from European magazines. With Infogrames flexing their publishing muscle, North American gamers should keep a close look on this one once it hits the US shores in late 2001.

@XYZ: I'm not sure you know what kind of site gog.com is.

Patrician is not abandonware. It's sold at gog.com. It is under copyright. It is not freeware. 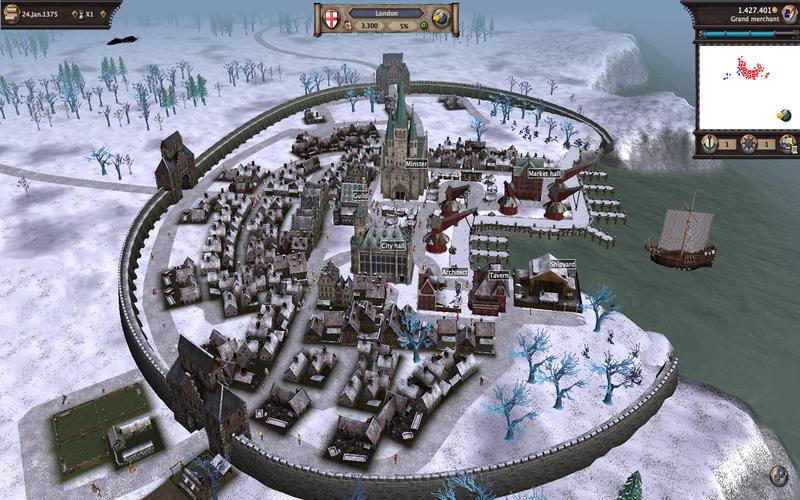 The Patrician is available for a small price on the following websites, and is no longer abandonware. GoG.com provides the best release and does not include DRM, please buy from them! You can read our online store guide .

The Patrician was also released on the following systems: